I will so get into trouble for posting these pictures as I am doing it on the sly hoping no one will notice! My better half bought me this lovely little doll for Christmas as when I spotted her I could just imagine her standing by the Christmas tree in her lovely Christmas dress but I am supposed to be saving some money not spending it so her bought her for me as a gift! He thought he better tell me though as he though it best for me to see her when she arrived just so I check she was ok before he left feedback and glad he did as her hair was very strange was really long one side and short the other her right arm was in a strange position and it hadn't been clear on the photos on the Ebay listing that her head was fixed so far over in the tilted position as all the photos had been on their side and having the new computor I couldn't work out how to turn them! anyway I got into conversation with the seller and did mention she wasn't exactly as I expected and she was really lovely and immediately offered a refund of £10 or I could return her. Have to say she has such a pretty face I wasn't sure I wanted to send her back so I decided to keep her and with the money off she was a really good price the seller said she paid almost £100 for her ouch!I have trimmed her hair and will just try not to let the arm bother me I don't suppose unless you were fussy like me you would notice anyway and her tilted head is just the way she is and adds to her character she is just so pretty the other things don't matter as much.

Her name is Melody and thought I would take a few sneaky photos of her by the tree and when I get her for Xmas it will be a madhouse here and I prob won't get chance and by the time I do all the Xmas stuff will be packed away so decided I had better take them now!! :-) she looks so sweet and innocent and looks just perfect next to the tree and I am so glad I decided to keep her! 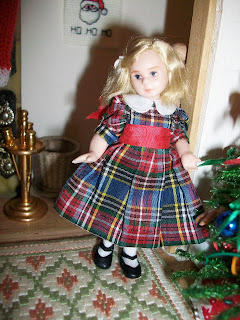 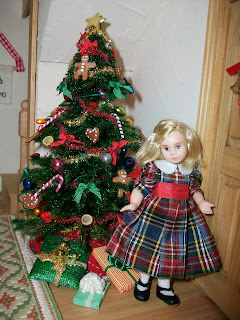 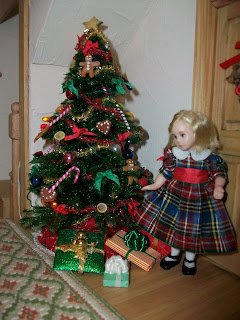 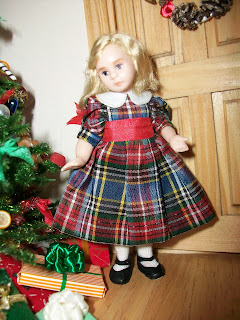 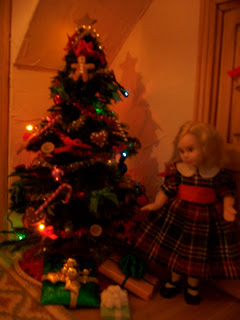 Also had the doggie hairdresser visit today I swear my dogs get their haircut more often than me lol Finky has had her Xmas cut so she looks all pretty for the festive season although she will be freezing now and will no doubt sneak her way under the covers of our bed tonight! the other 2 get done in 2 weeks so they will all look lovely and smart too! (excuse the red eye I have a new pc and havent worked out how to fix it on here yet!) 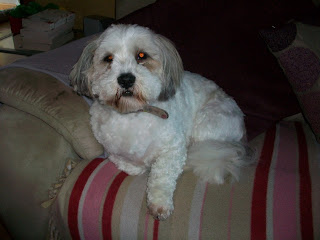 Fishermans Rest all set for Christmas

As you know I have done the Christmas fayre scene which is on the village green but decided I wanted to do the inside of one of the houses and thought Fishermans Rest was the best as it has a nice glowing fire and big fireplace. The stockings (made by my lovely friend Deb!) are hung ready for Santa there is mulled wine keeping warm on the wood burner, mince pies and chocolates and of course lots of presents under the tree. Rose is reading 'Twas the night before Christmas' to baby Grace (the book was a lucky Ebay find and is super cute with lovely drawings). In the kitchen the table is all laid for Bob and Rose's Christmas dinner (need to do more peas and carrots for the dish!) Have also put some pics of the bedroom on as they have bought new furniture they sold the other stuff they had to Angela when she moved into Crabpot. Bob was very happy as he always thought it was a bit on the girly side and likes the new things much better! Was also good as now I had the perfect home for the lovely set of wicker drawers that go with the wonderful chair! 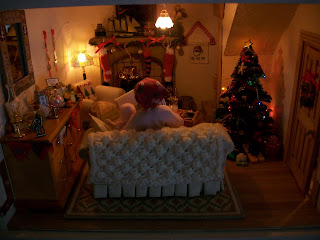 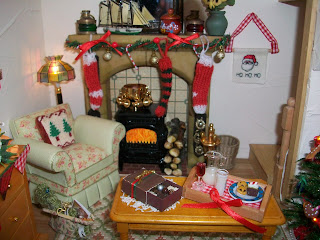 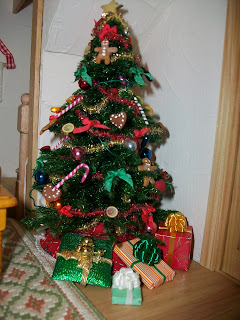 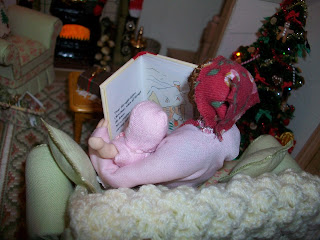 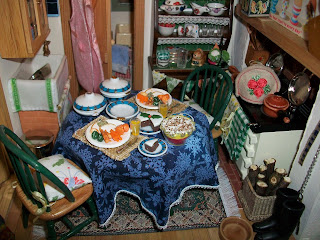 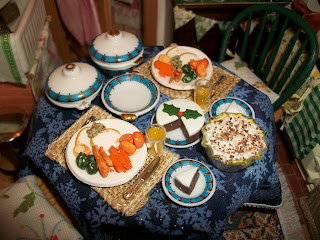 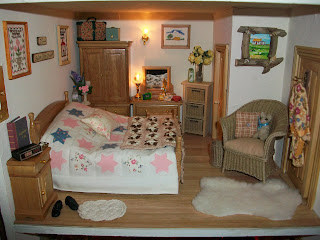 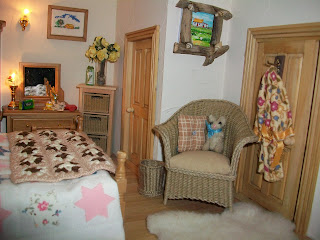 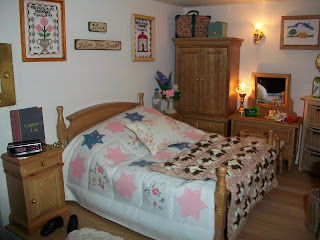