Well the first of my new houses arrived safely today. It had a bit of damage to the chimney which was a shame. They must of plonked something heavy on top of it and it had pushed the chimney pot through the side of the chinmey itself. Not to worry though a bit of polyfilla and its all sorted and now you would never know. Its always such a relief to open the box and find them in one piece so  bit of damage is always easy to sort!

I knew it was yellow but it was a much brighter yellow than  I expected. Nothing wrong with yellow but it didn't really look right with all the other houses. The interior wood is also all white so I thought it would suit being white on the outside too. After deciding to do that I also thought if I was going to repaint it I could change the colours of the door and windows to something a little different as it looked a bit similar to Lavender Cottage. Funnily enough the name on it was Lavender Cottage so sadly I will have to rename it as I can't have 2 with the same name Bob would get most confused! 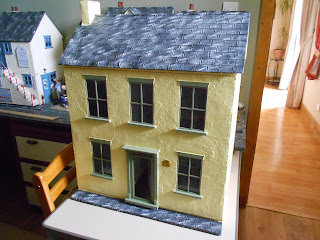 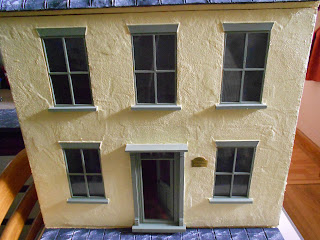 I had a pot of a nice dark purple/grey colour and thought that might look nice against the white. Luckily the acetate on the windows came out really easily so that made the job a lot less hassle! 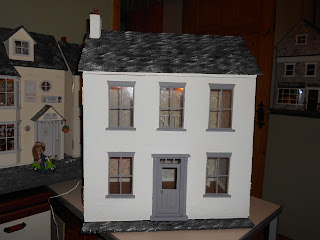 I'm really pleased with how its turned out. It looks like a different building and now it really fits into the village well. It def has a shop feel about it so it will be a homewares store. I am thinking the Sea Breeze Cottage would be nice name so it might end up as that unless I think of something else!! 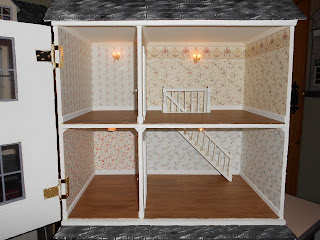 Its so beautifully decorated with really pretty papers so I will be keeping those! This will be the 2 shop floors..... 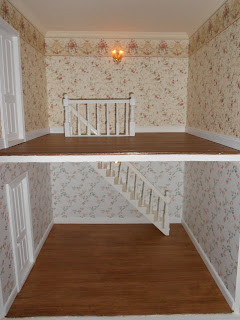 ....and downstairs will be an office with a staffroom/ kitchen upstairs. 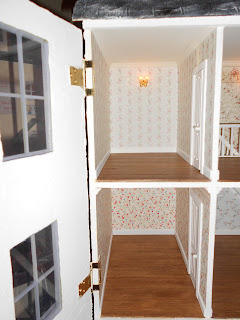 I also just had to show you a gorgeous little Dolls house crosstitch I bought from a good friend on Facebook. Its so lovely I just couldnt resist and it will look lovely up on the wall in Dollyland! 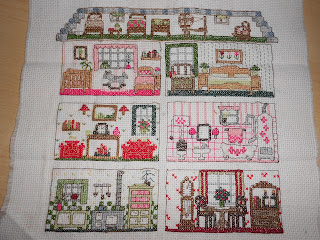