Emptying Fairbanks and making use of it all again!

Well the weather outside is frightful......you know the rest!! So we have had a weekend at home cosied up! The good thing about staying in is I get lots of time in Dollyland!!

I have been thinking for a while about selling my Fairbanks house as I really don't spend any time on it. Its a lovely house and I really enjoyed doing it but I just don't have the same passion for it as I do my village. I also had a a bit of a spend before Christmas with 2 new houses and other things so the money will be useful too!! Hopefully its already found a new owner my friend Scarlett who has always wanted one so I know it will be going to a good home! I emptied it out over the weekend and have to say I had lots of fun finding new homes for all the bits and pieces I had. I think I realised then that it was the inside and all the things I have found to fill it that excited me more than the actual house, and now its empty I won't be quite so sad to see it go!

I had a lovely patio set in Fairbanks garden that I had found ages ago on Ebay. There were also various plant pots and a bbq. I really wanted to keep the patio set and I decided it would go best outside the B & B. I had made a little outside area a while ago which to be honest was driving me nuts as every time I opened the cottage next to it I had to move it out of the way. Luckily it was too narrow for the patio set which meant making a new one from scratch. I had a bit of ply the right depth and reusing the fencing I made a new outside space! 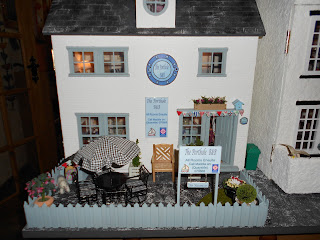 I also added the outside signage just to make it look a bit more like a B & B and not just a cottage. 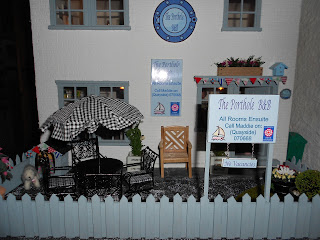 The patio set fits perfectly. I added the seat pads which funnily enough have been waiting to be done for 6 months and the minute its in the village it got done straight away....I rest my case lol! 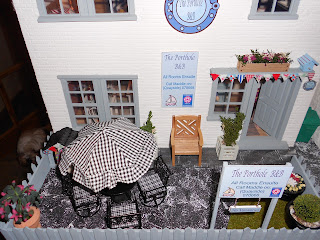 I love the little no vacancies sign with the chains. 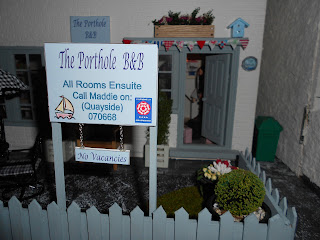 Beans is very happy with her new little house! Its a little resin kennel that Scarlett gave to me when she was over last week. I painted it to match, added a comfy cushion and some bunting. Of course she doesn't stay out at night its just for relaxing outside on sunny days! 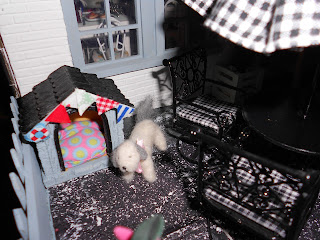 Patio set complete with comfy cushion all it needs now is some cocktails maybe?? 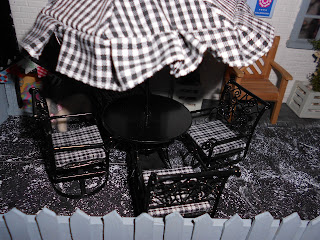 I had to add some bunting its a Quayside trademark!! 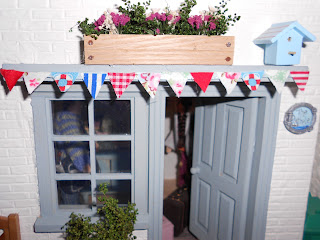 I also had a computer desk and filing cabinet from Fairbanks that needed a new home and I found the perfect spot! It was just what Mags needed to organise all the patients! 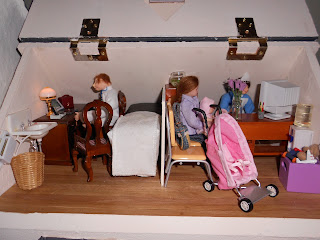 The surgery has now filled up nicely it just needs a few finishing touches. 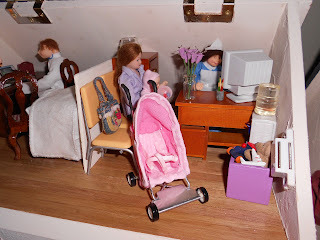 Also going spare was a nice shelving unit from Fairbanks dining room. I decided this would look nice in the homewares store full of modern things to buy. 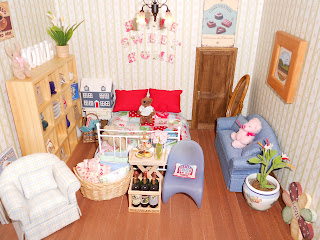 The plastic chair was also reused in here and the dolls house! 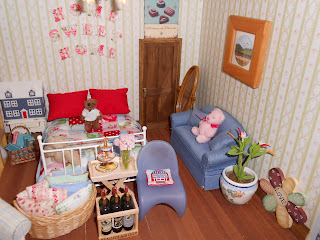 Quite pleased how it looks, just how I imagine it should it a posh home shop lol 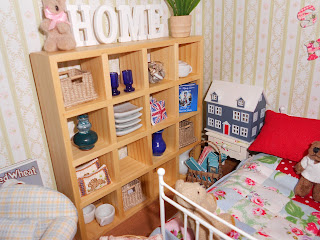 It was sad removing all the things I had spent hours searching and shopping for in Fairbanks. But it was so nice to be able to make use of so much of it in the village where I get to see it more. I used a lot of things in the new French style house as I didn't want that to be in a shabby chic style it was a bit obvious, plus I have already done that in other properties, I wanted something different. I love how its turned out but it just needs a couple of little things I have purchased on Ebay to arrive so pics of that coming soon!!!