Changing my mind about Seashell Cottage bedroom and having a good tidy up!

I decided to take the cream and black toile bedroom out of Seashell cottage and put it back into Seaview. Although I did like it in there I just felt it was a little out of sync with the rest of the house. I found a shabby chic bed on Ebay and bought a toilet bag for 50p from a charity shop with a rose pattern on and that was the beginnings of an idea for the new decor.

So far I have resprayed the bed white as it was pink when it arrived and stank of smoke so now its much fresher! I added some fabric around the base and decided to chuck out the foam mattress it came with as it smelled! Luckily yesterday I found a little cushion in another charity shop for 75p that is the perfect size for a mattress. I will add some buttons to it tomorrow and I will make also all the bedding. It already looks and smells much better and will be lovely a cosy when its all done! 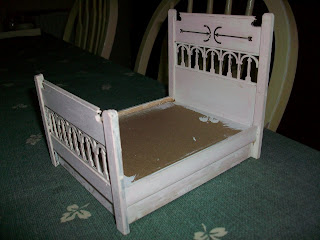 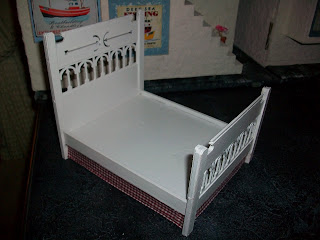 Next I painted and distressed a dressing table I paid £1.50 from the DH shop as it was broken. I found a little white stool I had and added the fabric to match the bedding. It now looks the part and tomorrow I will add some shelves to the room for lots of storage. I have decided not to go with a wardrobe and just have a clothes rail with a few pretty bits and some pretty hangers on instead. 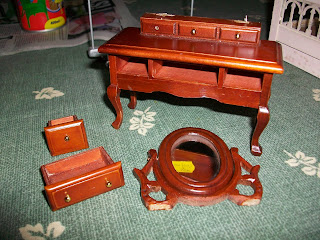 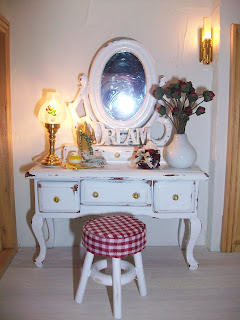 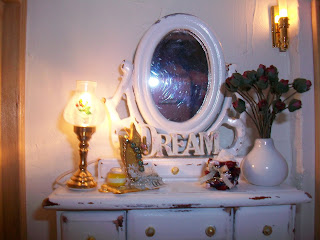 I decided I didn't like the chairs that came with the table in the kitchen so I found some others I had with little hearts that fitted in much better. They were also resprayed white and look so sweet, I just need to make some cushions for them tomorrow. 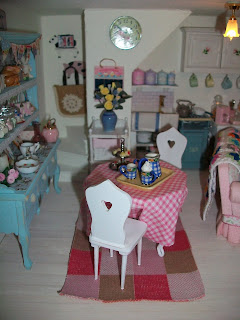 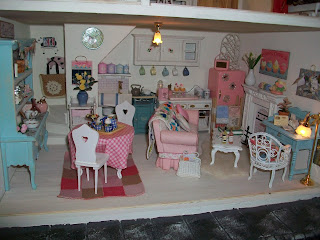 My friend Karen headed home today before the snow hit! hasn't been too bad so far but its very cold and snowy outside! I spent the day catching up on housework as its been a bit neglected as I have been having too much fun to clean lol. I also decided to give my craft corner a good sort out. I am very lucky that in addition to the spare room where Quayside is I have a nice little area outside it at the top of the stairs. I had some plastic drawers that were bought to go under the table Seashell cottage is on but they were very slightly too high and I never got round to returning them. Just as well as they now have a new home and have been put to good use for all my spare bits of wood etc. Notice the wonderful embroidered throw on the bannister? My Mum bought it me from Florida as a holiday gift years ago and its so big its the only place I can display it! Even then you can only see half of it but its so fab I love it!! 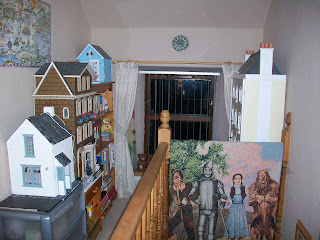 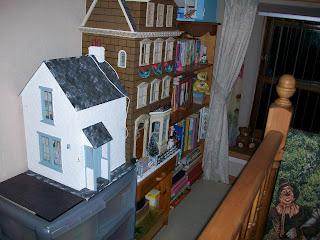