Exciting new changes in the village!

Well its been a funny old week so much has gone on in real life and in mini one!! As you know my Family were up and we were having a lovely time until we were one by one struck down by a really nasty cough and cold bug! It was really rubbish timing and although we didn't let it spoil our week it was hard to do all the things we were hoping to do! Everyone is now back home and as soon as this annoying cough goes away it will be back to normal! It was lovely to have them here I do miss them living so far away! Especially my Niece, I will miss seeing her little smiley face everyday!!!

I did have some deliveries to look forward to to cheer me up though!! :-) I spotted this house on Julies Ebay page and is just caught my eye! I immediately thought it looked like an apartment block! Although its taller than my others it works ok as its over 3 floors so it looks right. Its also only 10 inches deep which means it can sit behind Porthole without taking up too much space. I really couldn't afford it I have spent so much lately but it was a one off and before I knew it I clicked the dreaded buy button before anyone else beat me to it!! I really do have the willower of a flea!!

Its just as nice as I hoped and nice to have a bit of a project as it needs a little bit of work but not much. I will repaint the windows and door in a brighter colour and repaint the roof so it matches my others 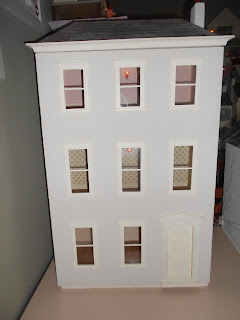 The inside is gorgeous and I won't change a thing! 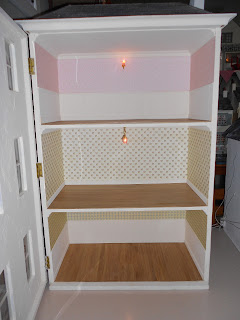 I love the panelled effect. The rooms are about 10 x 18 inches so a really good size and will make perfect apartments! 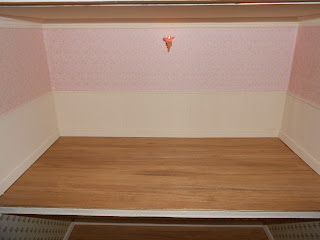 It sits just behind the B & B as its taller you can see over the top! getting to the light switch isn't quite so easy though lol! 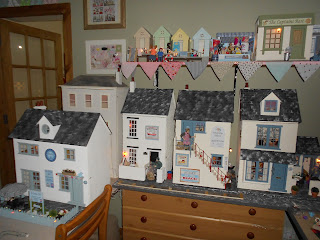 My next new arrival is Spinney Brook Cottage. I wasn't sure if I would get it as I know the lady selling was sad to let it go and couldn't part with it last time but this time she did and its now arrived in the village.

Its a lovely house and really does make the most perfect pub!! 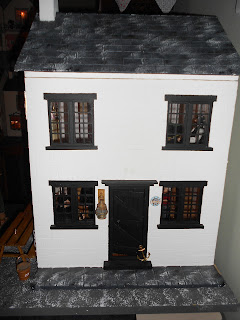 It has 2 really good sized rooms so lots of space to fill with more goodies! 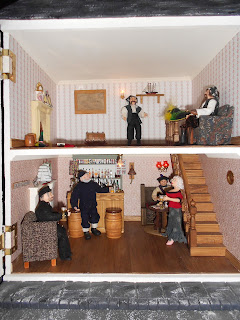 Downstairs in the bar all the regulars were keen to try out the new premises! Its funny seeing it all spaced out I need another table and chairs! 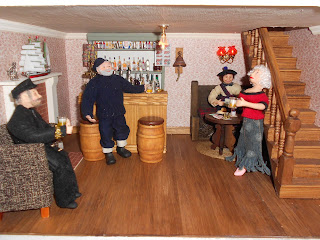 Cyril enjoys his 1st pint in Quayside in the new pub! 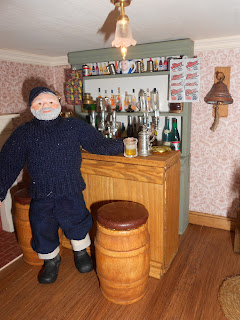 The corner seat is great under the stairs, it makes a real cosy little nook. I added the orange light to give it a cosy glow although you can't really see that in the photo. 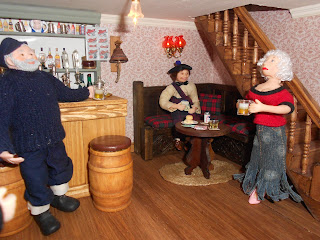 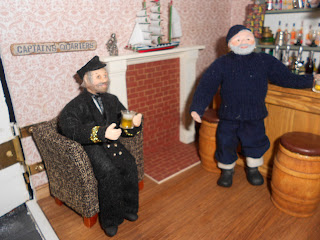 Upstairs the pirates have hired the function room for a private party. Not many have turned up yet, although thats probably just as well til the furniture arrives! 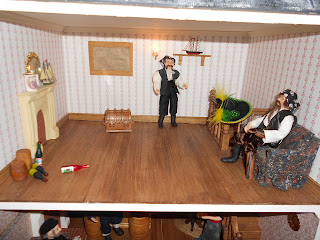 I have tried something a little different with this house as I wanted to have the pub benches my dad made me outside. I thought by having it facing outwards it looked a little less regimental and its much easier to access the pub itself. 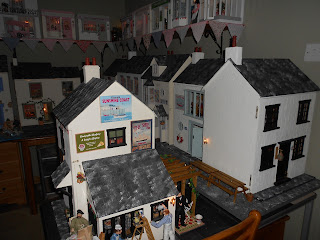 This is the view from the back. I had to take off the socket strip that was on it as it was right where you could see it. I patched it in with polyfilla and you can't really tell! 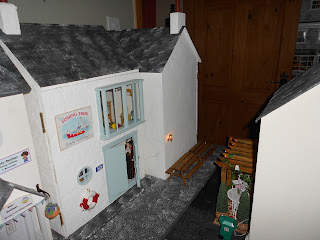 The room was a bit gloomy for taking pictures tonight as we have yet more snow!! I manged to get a couple with all the lights on though. Don't even begin to imagine how many extension leads are running along the backs of these houses ha ha!!! 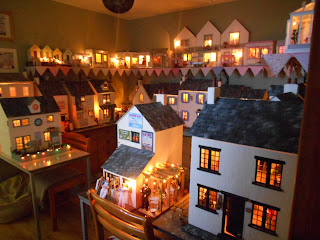 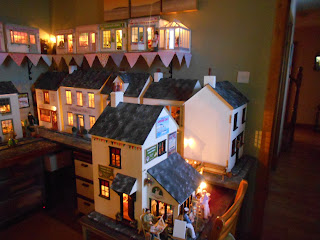 Last but not least one more small purchase which was a early Birthday pressie from my Mum. We were looking on Ebay when she was up thinking of how to expand the pub if  I didn't get SB. We saw the conservatory and the measurements meant it fitted just perfectly next to the small shops.We figured it would be a good plan B if needed. Of course now you know it wasn't so I needed another idea for it. I decided to expand the cafe as it seems to get a bit lost amongst all the others and its one of the main businesses. I jiggled them around a bit and have now put the cafe on the end and it looks perfect! 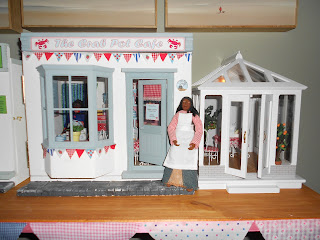 I took off the awful bright red brick paper that was round the bottom, I left the grey as the red was a nitemare to remove! I also added a light at the back and some wooden effect vinyl flooring. I had one spare table and chairs but it really needs another plus some bunting etc but really pleased with it, it looks lovely all lit up!! 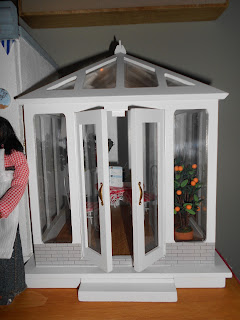