Boring things to show you today lol but things that had to be done! I spent the whole day on Monday repainting all the doors and windows in a nice white gloss which has made them look a whole lot better. I papered the chimney and re-papered the brickwork on the front as it was a little faded. I would have done the left side too but I only had a bit of spare paper that came with it. But will need some more to do the garden wall so will have enough then. 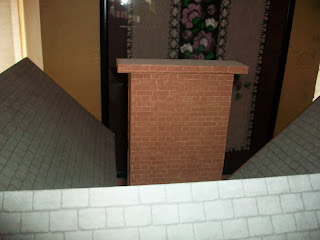 I also put some paving stone paper in the garden area. I decided just to go with just a patio with lots of pots and a nice patio set and will have a go at making a rotary dryer. Quite pleased at the effect it gives. Todays jobs were to give the front door another coat of paint I went with a nice bright blue to brighten it up a bit and I also got some tester pots for 50p yesterday for  the outside which I have painted today although you prob wouldn't even notice but I do lol. 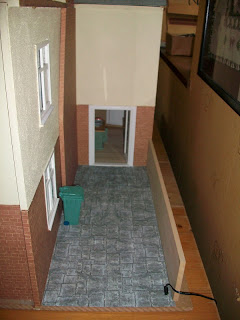 I did it in a similar colour as I liked the yellow I thought it suited it just did it a shade or 2 darker to brighten it up a little. I took a pic when I had done half the front so you can see the difference! Really pleased its really made a difference as the were a few little tears in the paper and white paint round the windows and its covered all of that. It was a very satisfying job although did panic at the end I might run out of paint as I just mixed 2 tester pots but I just about had enough! 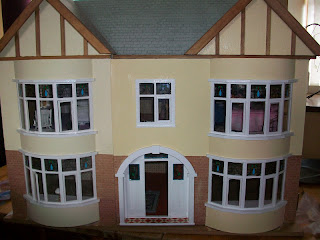 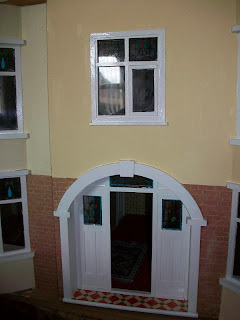 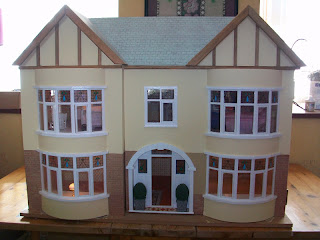 Also got a nice little patio set from Ebay today. Wasn't overly cheap but its the only one I have found with a brolly and thought it looked nice. Added the little base at the bottom as it was a bit wobbly with just the pole but I think it looks like a nice family dining area! Just needs some nice comfy cushions and a bbq! I see them all the time on Ebay but now I want one can I find one on there! 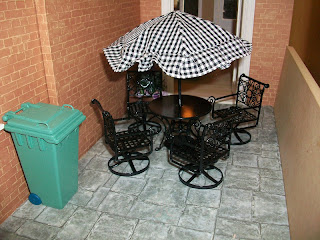 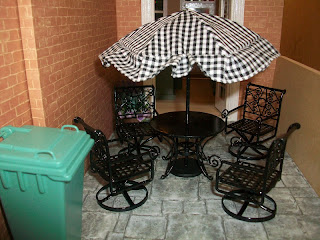